Our Philosophy of Care

At Chisholm Trail Dental, our philosophy is simple: Healthy Smile, Healthy Body, Live Well. Your smile is more important to your total body health and your overall quality of life than you may realize. That’s why we emphasize patient education to teach our community about the oral-systemic link, as well as the importance of feeling confident in your smile for your mental and emotional well-being. We do what we do because we love people, which shines through in how we practice every single day. The foundation of our practice is our relationships with our patients. When you’re in our care, you can trust you’re receiving the same treatment we would want for ourselves or for our loved ones. We’re here to help! 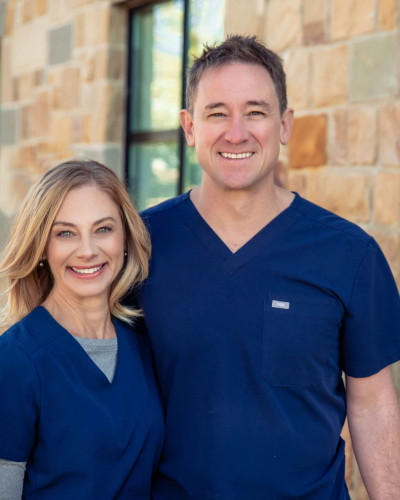 Adventurous in spirit, the Knights moved to Alaska where they practiced dentistry for 13 years. They have twin daughters. The Knight family relocated over five years ago. A desire to be closer to family and a longing for the Texas sunshine led them to call the Benbrook area home.

When Drs. Ryan and Cindy Knight acquired ownership of Chisholm Trail Dental in Benbrook, the practice reopened with new leadership and a fresh start. The Chisholm Trail Dental team hopes to raise awareness of the vital connection between oral health and systemic health to foster wellness within our community. Brandi grew up in the beautiful city of Anchorage, Alaska before deciding to move down to Texas for some warmer weather. She joined the team here at Chisholm Trail Dental in 2015 and hasn’t looked back! Brandi has a strong passion for helping others, and it shows in her level of care and compassion for every patient that visits our office. Brenyn resides in Azle,TX with her family and explores new places in her free time. She became a dental assistant because she loves seeing people smile and always loved going to the dentist as a kid.

Brenyn loves working with the team at Chisholm Trail Dental because she believes it’s a special place that cares so much about every patient on a personal and professional level. She finds her job extremely rewarding because of the opportunity to see patients come in embarrassed with their smiles, and watch as the team helps them build a healthy mouth and changes their lives!